* Delivering HP Enterprise products to IT Professionals worldwide since 2003 * 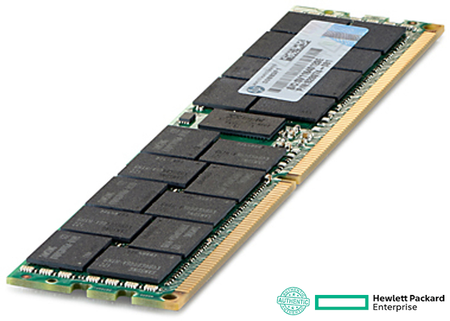 HPE memory option 805351-B21 is a DRAM module for use in certain HPE ProLiant Gen9 (v4 versions only!) servers. This is genuine HPE memory. This is NOT third party or generic memory. A sampling of compatible machines is found below but that list not necessarily complete. Feel free to contact us to verify compatibility with your machine. The 805351-B21 memory is a 288-pin DIMM form factor, and has a capacity of 32 gigabytes. This memory is PC4-19200, with a speed of 2400 Mhz. This memory is one of our most popular products. Please note that this is Registered memory, which cannot be mixed in the same server as Unbuffered memory.

805351-B21 is the option part number used by HPE to reference this memory, but that part number won't appear anywhere on the module. The HPE assembly number of 809083-091 will be visible on the label on the module.

From HPE:
Does your server have the memory it needs to perform as its role expands over time? When you choose HPE DDR4 SmartMemory, you get great performance, reliability, and efficiency that provides the compatibility, capacity and bandwidth you need to productively manage your expanding workload with the HPE ProLiant Gen9 server, Apollo Family, Synergy and Blade Systems. The quality and reliability of DRAM are more important now than ever, as data center trends such as server virtualization, cloud computing, the use of large database applications, have all increased the need for higher capacity memory with greater uptime. HPE SmartMemory goes through rigorous qualification and testing processes that unlock extended memory performance features available only with Hewlett Packard Enterprise Gen9 servers. This extensive testing ensures that HPE server memory is completely compatible with and optimized for HPE servers.